It's been a long time since I've cooked something American (or actually, photographed something while cooking American, because I had Jambalaya this week and BYOB recently too), so I finally decided to make crab cakes. I've been wanting to make these for ages, but thought I couldn't get crab meat here in Holland. But then it occured to me, that while they don't sell fresh crab meat at the supermarket, I could probably get it in can! So I did :)

I found an interesting recipe of Maryland crab cakes on Epicurious, which is a great foodie-website. They have a series of 80 dishes from all around the world, including 8 in the USA. One of them is crab cakes from Maryland. Traditionally, blue crabs are used, as they can be found in the Chesapeake Bay, but of course I couldn't get hold of those. I also learned the difference between 'boardwalk' crab cakes and 'restaurant' crab cakes, the former being deep fried and often stuffed with various fillings. The latter is a more sophisticated, gourmet version and is generally served on a platter or open faced sandwich.


Now I don't know how traditional the crab cakes I made are, but here is the recipe (copied from Epicurious):

In a bowl whisk together the butter, the eggs, the sour cream, the parsley, the lemon juice, the Worcestershire sauce, the paprika, the salt, and the cayenne and stir in the crab meat and the bread crumbs gently. Form 1/2-cup measures of the mixture into twelve 3/4-inch-thick cakes and transfer the crab cakes as they are formed to a baking sheet sprinkled with half the cornmeal. Sprinkle the crab cakes with the remaining cornmeal and chill them, covered with plastic wrap, for at least 1 hour or overnight.
In a large heavy skillet heat the oil over moderately high heat until it is hot but not smoking and in it sauté the crab cakes in batches, turning them once, for 3 to 4 minutes on each side, or until they are golden, transferring them as they are cooked to paper towels to drain. Keep the crab cakes warm on another baking sheet in a 200°F. oven. Serve the crab cakes with the tarragon tartar sauce and the lemon wedges.

I apologize for being lazy and copying the article, but I thought I'd rather show you some photos of my preparations (and there's a great video on the website too, check it out!). I halved the recipe, by the way, and still got eight crab cakes out of it. 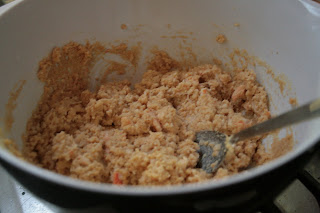 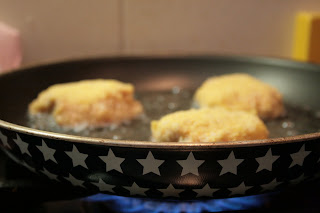 Fried in my special America frying pan (gift from Larissa, of course, IKEA!) 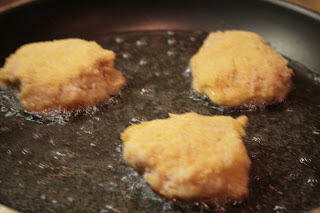 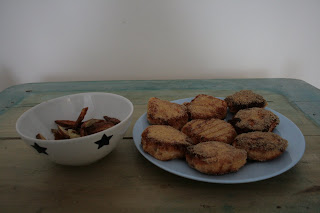 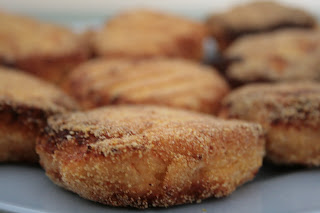 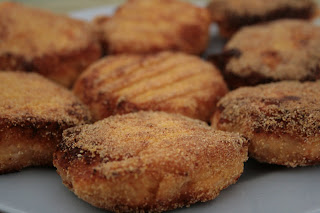 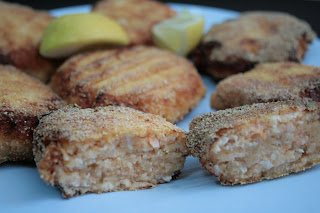 Served with lemon wedges (but missing the tartar sauce)

I did like this recipe, however, the crab cakes tasted a bit bland. I would therefore recommend additional seasoning or maybe a chopped spring onion as a filler.

And lastly, I hope to be tasting the 'real thing' in Maryland some time soon, hopefully next year! I would love to visit Maryland, it's on top of my wanting-to-visit states!