It's 9/11/2010. Nine years after the disastrous fall of the Twin Towers, I have finally taken up the courage to watch a documentary. I've chosen to watch the documentary 'the 102 minutes that changed America', which only uses footage from locals on camcorders or cell phones. Of course I'd seen the live footage of the planes crashing into the buildings before, as well as the collapsing towers. I've seen the main shots.

But never have I fully realized the enormous impact on the New Yorkers and the aftermath in NYC. The smoke rushing through the streets after the buildings have collapsed, while people are trying to get away from it by running up north. This is the stuff you see in movies and computer games. And then, when everybody has been evacuated: The white debris changing the always-crowding-on-the-streets-city into an eerie ghosttown.

I found the documentary highly impressive and for the first time really saw the disaster through the eyes of New Yorkers. I could feel their panic, their fear, their disbelief. I will be traveling to New York next summer and I am most certainly planning to visit Ground Zero and show my dedication to the people who have lost friends or family members, or those who have died themselves.

In order to commemorate the events on 9/11/2001 I've decided to cook a New York meal, albeit simple. It's nothing to brag about from a culinary point of view, and I won't add any recipes, as these are nothing more than a quick bite into a memorial service. However, I will show you some photos of the things I made and consumed, whilst watching the impressive documentary.

Bagels with Salmon and Cream Cheese

Bagels were introduced to America by the many Jewish immigrants. These boiled breadrolls with a donut-like hole in the middle quickly became popular in New York City, and are thus known as typical NY food. Salmon and creamcheese on a bagel is a classic combo. 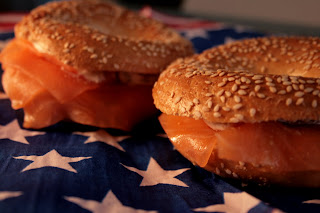 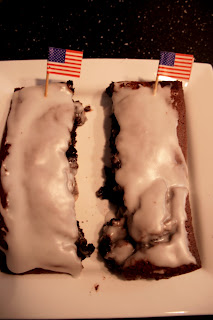